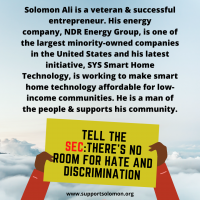 (LegalLaw247.com, June 18, 2020 ) Los Angeles, CA -- A newly formed group of African American community members are demanding that the Securities and Exchange Commission immediately drop their complaint and apologize to entrepreneur Solomon RC Ali who has been enduring a long battle protesting his innocence to the government agency. The group, which refers to itself informally as Black Wealth Matters, is calling the SEC, members of the House of Representatives Financial Services Committee which is charged with overseeing the agency, and other influential figures in the black community to rally to support Mr. Ali.

Solomon Ali is the picture of the American success story. Raised in South Los Angeles, he joined the military and served his country. After leaving the service, he built a maintenance company, then a nursing home business, then built Universal Bioenergy—one of the largest minority owned energy companies in the country. Most recently, he acquired the patent rights to smart doorbell technology through his most recent venture Revolutionary Concepts Inc. Prior to the SEC’s involvement, many investors made as high as a 30,000% return on their investments based on aggressive licensing deals negotiated with Amazon, ADT and others. Solomon and his executive team never sold a single share. Moreover, Solomon continued to take his salary entirely in stock.

“It is tragic that in the wake of the murder of George Floyd and on the 100th anniversary of the bombing of the ‘Black Wall Street’ in Tulsa that the SEC weeks to put another black man down and continues to stifle black entrepreneurs,” said Arletta Saafir, the group’s leader.

“We know that this is a deliberate attempt by the SEC to tell black entrepreneurs a simple message: don’t even try to create wealth.”

“We call on members Congressional Black Caucus and the House Financial Services Committee—particularly Maxine Waters and Alma Adams to tell the SEC that if they continue to attack Solomon Ali that they will be defunded.”

Lastly, they recommend contacting Congresswoman Maxine Waters at (323) 757-8900 and letting her know that Solomon needs her help.

More information can be found at http://www.supportsolomon.org